Bloomberg, Cornell Tech, and Tech:NYC invite you to tune in for the latest installment of the Cornell Tech @ Bloomberg Speaker Series, featuring Brad Svrluga, co-founder and General Partner of Primary Venture Partners, in conversation with Scarlet Fu of Bloomberg Television.

Originally founded in 2004 as High Peaks Venture Partners, Primary Venture Partners makes early stage investments in New York-based tech companies, offering them not just financing, but also guidance on the pathway to growth and a network of local experts who provide operational, strategic, and recruiting support. The firm’s successful exits include Mirror, Jet, and Ticketfly, and its current investments range from providers of dog food and pizza delivery to companies in healthcare and ocean exploration. In February 2021, Primary announced the close of its newest fund — and its largest to date — with $150 million in commitments from its limited partners to continue investing in New York startups.

We hope you’ll join us for this conversation, in which Svrluga and Fu will discuss how Primary’s geographic focus has become one of its calling cards, why location still matters when remote workforces have become the norm, what Svrluga looks for in founders and what founders should look for in investors beyond just capital, how COVID-19 has affected Primary’s portfolio companies, and what future Svrluga sees for entrepreneurs and startups in New York. 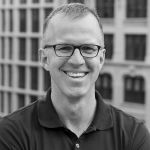 Brad Svrluga is a co-founder and General Partner at Primary Venture Partners. He has been a venture investor since the waning moments of the dotcom bubble in 2000, when he joined one of the dozens of micro-firms that popped up at the time, but likely never should have. He was previously a strategy consultant with Monitor Group, leading projects out of the firm’s Cambridge, South Africa, and Brazil offices.

Brad co-founded Primary’s predecessor fund, High Peaks Venture Partners, and launched Primary in 2015 with General Partner Ben Sun. He is an active participant in the New York City venture community, and writes not frequently enough on his blog, Can I Buy a Vowel? Brad is a graduate of Williams College, where he captained the rugby team and majored in economics.