*REGISTRATION FOR THIS EVENT IS AT CAPACITY AND NOW CLOSED*

Bloomberg, Cornell Tech, and Tech:NYC invite you to join us for the latest installment of the Cornell Tech @ Bloomberg Speaker Series, featuring Daniel Ramot, Co-founder & CEO of Via, in conversation with Scarlet Fu of Bloomberg Television.

Daniel Ramot and Oren Shoval founded Via in 2012 as an on-demand, mobile-based platform to power dynamic shared rides. Inspired by the sheruts, or shared taxis, they had used in Israel, Ramot and Shoval launched Via’s consumer service on the Upper East Side of Manhattan in 2013.

Today, Via operates in cites across the U.S., all five boroughs of New York City, and more than 20 countries around the world. Its offerings range from being a direct provider of rideshare services, such as in New York, to partnerships with more than  90 outside organizations and municipalities that leverage Via’s technology to power their own rideshare services.

In contrast to other rideshare companies, Via sees itself as operating within the market for public transportation rather than competing with private cars and taxis. This summer, Via announced a partnership with New York City’s Department of Education to launch Via for Schools. The company’s software will be used to optimize the routes of the City’s 10,000 school buses, providing students and parents with real-time information on their buses’ whereabouts.

We hope you’ll join us for this conversation, in which Ramot and Fu will discuss Via’s place in the rideshare market, how Ramot’s Ph.D. in neuroscience was the perfect preparation for launching the company, why it chose to partner with cities on public transportation, and where it might go next. 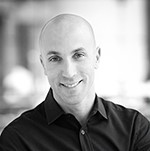 Co-founder and CEO
Via

Daniel Ramot is the Co-founder and CEO of Via. Prior to Via, Daniel built supercomputers designed to discover new pharmaceutical drugs at D. E. Shaw Research and developed avionic systems for F-15s and F-16s for the Israeli Air Force. He has a Ph.D. in neuroscience from Stanford University and is a graduate of the Israel Defense Forces’ elite Talpiot computer and science training program.