Registration for this event is closed.

Bloomberg, Cornell Tech, and Tech:NYC invite you to join us for the latest installment of the Cornell Tech @ Bloomberg series, featuring Ganesh Srivats, CEO of Moda Operandi, in conversation with Emma Chandra, a Bloomberg Television and Radio reporter who covers the retail and consumer sectors.

Founded in 2010 by Lauren Santo Domingo and Aslaug Magnusdottir, Moda Operandi allows customers to shop for clothes as soon as they appear on the runway. The company has raised nearly $300 million in venture capital, while transforming the relationship between fashion designers and consumers. Traditionally, those consumers only had access to pieces when they appeared in stores, months after they were selected by industry buyers. Moda’s trunkshow model lets customers purchase any piece from a designer’s collection, allowing them to play a direct role in determining which items shown on the runway make it into production.

This approach not only provides consumers with earlier access to more designs, but also gives Moda valuable intelligence about what will be trending in the upcoming season. Since Ganesh Srivats became the company’s CEO last summer, he’s been employing this data-centric approach to drive Moda’s business and growth, which is currently targeting expansion to China. Moda recently released its first ever Runway Report, a forecast of this fall’s trends based on its customers’ behavior on its site (capes will be in, corsets out).

We hope you’ll join us for this conversation, in which Srivats and Chandra will discuss his transition from launching cars at Tesla to making designer collections more accessible at Moda, the convergence of data, artificial intelligence, and fashion, the benefits of bypassing fashion’s traditional gatekeepers, Moda’s role in the emergence of new designers, and what New Yorkers will be wearing this fall. 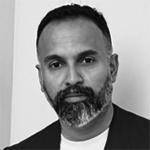 Ganesh Srivats is the CEO of Moda Operandi, the only luxury fashion platform inviting consumers to shop directly from designers’ complete runway collections prior to production.

Ganesh was previously Vice President at Tesla, where he was responsible for growing the company’s North America and EMEA markets, as well as global marketing, customer experience, sales operations, Tesla.com, digital products, and other factory-to-consumer activities. He also oversaw the go-to-market launch of the Model X SUV, and the Model 3 sedan, Tesla’s first mass market vehicle. Prior to Tesla, Ganesh spent 10 years at Burberry, where he held various roles in strategy, business development, customer insights, and most recently, Senior Vice President of Retail, Americas. Ganesh started his career in the private banking sector at JPMorgan Chase.